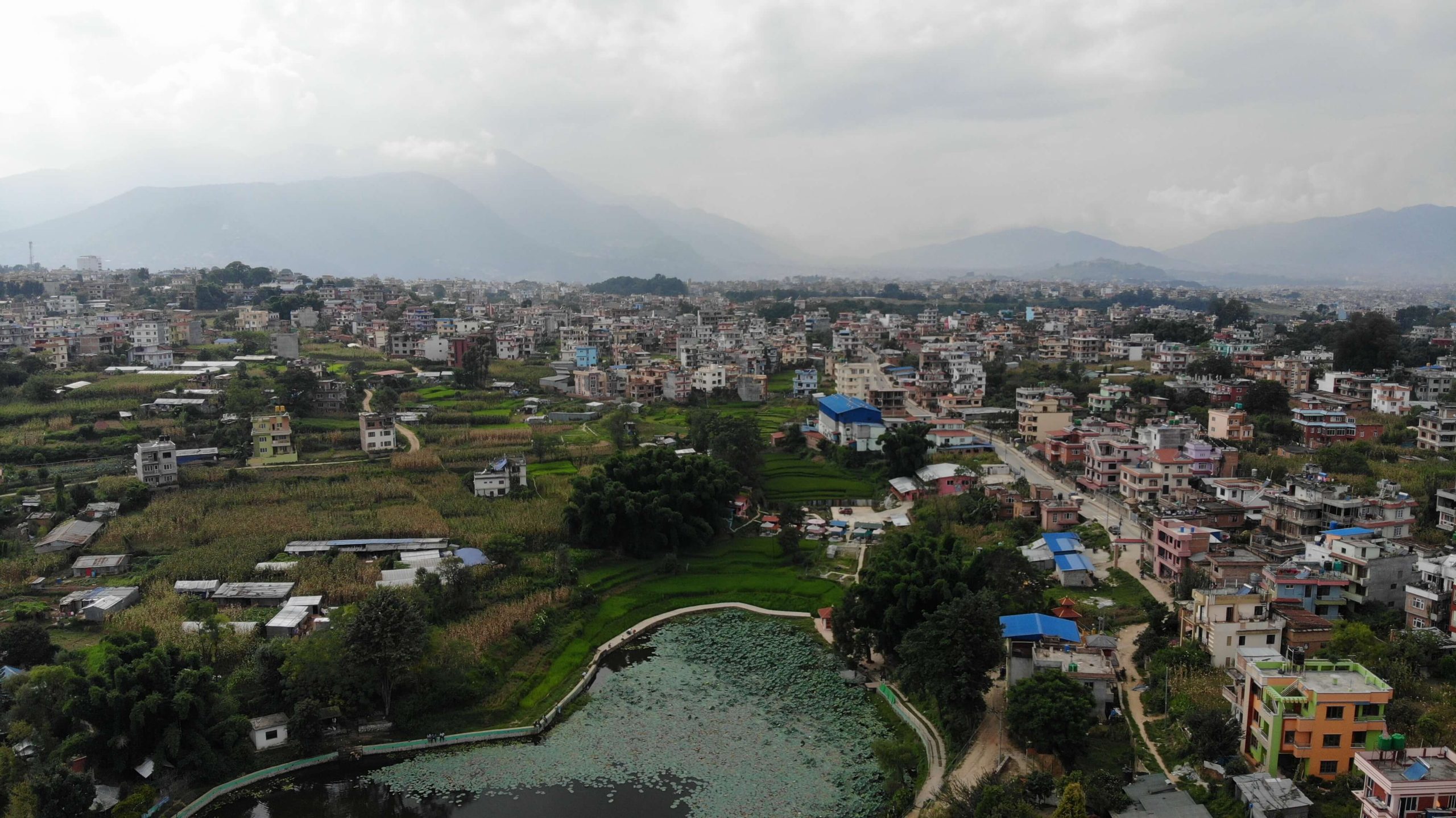 Ecosystem-based Adaptation (EbA), involving the conservation, sustainable management and restoration of ecosystems are cost-effective solutions that can help people adapt to the impacts of climate change.

Sapan Tirtha is a religious sacred site with a temple and historical pond where very traditional rituals have been connected for long period of time. People take bath believing that it will protect from skin diseases.

The site is observed already developed with cement and concrete structures with little attention from the perspective of climate change adaptation. The source of water is from the upstream site and the sites seem much more problematic due to haphazard quarries and construction for the residential development. Two streams are passing through the compound of the temple boundary but the very concentration of silts (soil) indicates that it has degraded the upstream area which lies in the Shivapuri National Park and its BZ area.

Due to such activities, the creeks and stream sites along the slopes are not being managed with proper measures for soil conservation and landscape management. The upstream site belongs under the buffer zone management committee of the Shivpuri Nagarjun National Park. The upstream streams and watersheds are to be conserved to preserve the sources of water of the Sapantirtha and to reduce the impact of sedimentation and water recharge for the downstream urban people.

The lake is known as a natural habitat for a variety of aquatic plants, fish and migratory birds. The lake is considered rich in aquatic wildlife and bird species. Many species of native fish such as Barbs and Snakeheads are abundant. This is also home to several bird species like Black Kite, Black Drongo, Cattle Egret, Oriental Magpie Robin, Common Myna, Rose-ringed Parakeet and Red-Vented Bulbul are some of the resident birds. Migrants include Cuckoos and Eurasian Coot. It is the best place to watch birds in the Kathmandu valley.

The lake has been used for various purposes like washing clothes, bathing, fishing, irrigation, as well as religious purposes. However, boating and swimming in the pond have been closed due to safety concerned. Due to the uncivilized human activities and pollution, the beauty of the pond has been decreasing day by day. But the local people and authorities have taken things into their own hands and are trying to preserve the integrity of the place.

Nagdaha is a wetland (water body) in the middle of settlements and previously farmlands in the Ward No. 24 of Lalitpur Metropolitan City. There is no permanent regular source of water for the wetland. However, farmlands in the east part are the source of water and silts that gradually decrease the depth of the wetland. North and east part has shallow water level and is covered by water lily and other aquatic weeds. Recently the boundary of the wetland area is surrounded by a concrete wall at ground level to protect from encroachment. Likewise, plantation of ornamental trees has been done where there is open space. Drying up of the water sources and increasing drought periods due to climate change may make the lake without water. Conserving water is an important EBA intervention.

There are two plots: one is the park area and another sloppy land with Utis (Alnus nepalensis) trees in the community forest. The site constitutes different features as below.

The site is on the northwest slope and has very weak sandy silty soil structures, slope failure is observed, and the drainage is causing the slope failure and mudslides downstream. At the bottom of the sites, there are a few sources of spring water. The site is being developed for garden and park purposes; however, the structures are not being developed with consideration to the adaptation features for climate change.  A cement structure is being used. A few ornamental plants have already been planted in the semi-developed terraces and park areas.

The sloppy landscape structures seem high risk of landslides and mudslides due to non-systematic drainage and channel of the stormwater flow during monsoon and rainy seasons.

The second site comprised the forest with a majority Utis ( Alnus nepalensis) and trees are already tall and in some locations, there are shrubs and empty small patches. The forest site is the source of water conservation for the downstream. It seems not to manage forests and sites. In this site, the sloppy land demands some conservation treatments.

Nil Barahi temple is located in the northern arena of the historical city Tigani, Bhaktapur, now it is located in Madhyapur Thimi Municipality. It is Balkumari Temple, considered one of the four Barahi of the Kathmandu Valley. There is a natural stone inside the temple which represents the Nil Barahi herself. It is said that during the reign of King Vikram Sen, this deity was established over there adopting the Tantrik way. Besides the Nil Barahi temple, there are other images of Astamatrika, Bhairava and Pati on its premises.

Nil Barahi is a small hillock and a community forest area surrounded by settlements in the south and agriculture farms in the east, west and north. The hillock is a deposition of course sands and soil is easily erodible by rainwater. The main location of the temple’s surroundings has been vulnerable due to landslides and erosion on the southern side. Meantime, drainage of stormwater has been a problem for erosion due to weak geological structure.

The forests surrounding the temple have made it a serene and peaceful amenity and the forest is named the Nil Barahi Community Forest which is managed by the user group with support from the Division Forest Office, Bhaktapur. The registered user group in the Davison Forest Office have to manage the forest sites according to the approved periodic operational plan. The trees on the southern slope and hillocks are planted with Chir pine and the trees are not being managed properly with respect to the forest management principle. The northern sites of vegetation comprised mixed broadleaved species. Unmanaged forest sites are supposed to be promoting invasive species such as Lantana and other species.   Plenty of monkeys are found around the locations and food and fruits offered by the visitors are the sources of livelihood for the monkeys.

The southern sites and the surroundings around the hillocks seem so weak geological structures. The sandy nature of the soil is accelerating the soil erosion and landslides along the hillock and at the base and downstream the deposition of the sands and soils has made problems for the people’s residents and also the Manohara River’s catchment.

At the same time, the site is a very well-known religious and entertainment eco-tourism visiting location. A number of small shade houses are  serving for picnic purposes with water and electricity facilities. This is a good source of income for the community forest user group.

With regard to the conservation effort, a number of stone check-dams have been constructed to protect the hillocks on the south and north-east sides of hillocks; however, the structures have not been sufficient and need a robust long-term plan for systematic implementation for impactful results.

Dhanwantari site is public land along the Dhobikhola corrider. The public place is intented to build up ecobased garden with sustainable water recharging station for the sites and community.