Our Dream City in WOW Mahdesh – Digital Storytelling for Youth

Our Dream City worked with British Council’s gender equality focused Festival Women of the World Madhesh to conduct two digital storytelling workshops in the cities of Birgunj and Janakpur and develop “Digital Storytellers” by upscaling their skill on content writing, multimedia, social media promotion and mapping their own place. 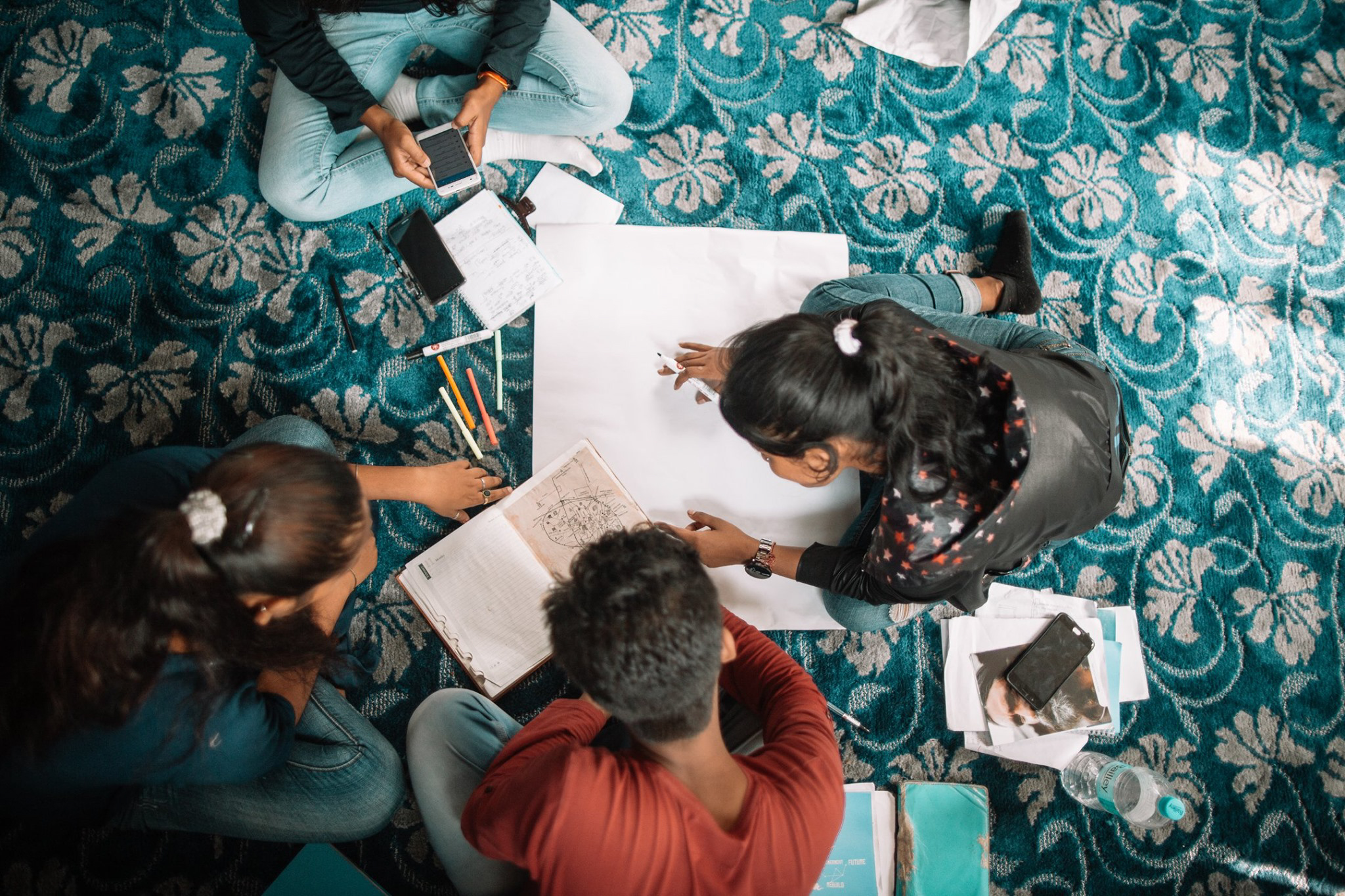 In October 2019, in the lead up to the third edition of the British Council’s Women of the World Festival, ODC hosted two Digital Storytelling Workshops in the cities of Birgunj and Janakpur. Targeted to young women and men, the workshop built the participants capacity to use digital mapping and storytelling so that they may produce stories relevant to women/girls by reviewing gender-based challenges and opportunities in their respective cities.

The workshop developed participant skills in content writing, multi-media production, social media promotion and digital mapping. As part of the engagement the participants documented stories of people in their cities using digital maps and multimedia to develop interactive digital portals.

The workshops were attendance was 95% female. And most participants did not come from backgrounds in storytelling, media or journalism. Through interactive sessions and hands-on learning, the participants worked individually and in groups to develop stories for digital release. Feedback from participants were recorded through survey forms and video interviews.

One of the applications of the learning was the mapping of open spaces in each of the city. Stories were developed by participant on model women/girls who exemplify talent and virtues. These included stories about mithila artists, national talent competition winners, stories of policewomen, female riksaw drivers and many other inspiring subjects. Additionally, safe and unsafe spaces (defined subjectively through interviews with local women/girls) were mapped to create safe/unsafe maps.  Altogether 15 stories were collected from the participants. After the training additional stories were developed by the participants on their own.

Outputs from the workshops were showcased at the Women of the World Festival Madhesh that took place on 6 and 7 December in Janakpur. StoryCycle occupied a stall at the WOW Madhesh Marketplace where it presented the safe/unsafe maps. The booth also featured an unpopulated map for visitors to mark safe/unsafe places according to them.

Stories from the Participants

Sabita Devi Sada is the first and only educated woman of the Musahar community, Dhanushadham. She got married at a young age right after completing the Board examination of class 08. She is not just studying for herself but also took teaching as a profession to educate children of her community. She has 3 sisters in law, father in law, mother in law, her husband and two children in her family. Her husband works in India while her in-laws work as local labor, it means sometimes her income could be the only source of income for the family. Not just she is motivated to educate her children, she wants to study further if she receives financial help for her education.

Ms. Hajara Khatun from Birgunj has a dream of becoming a nationally recognized singer. For this dream, she is trying very hard to take part in Nepal Idol – a national singing reality show. Her main obstacle is she has no support coming from her family. For her singing passion, though she has no help from family, the #KishoriShamvad program is providing her lot of support. Being a girl from the Muslim community and pursuing the singing profession is very challenging, the society never took it in a positive way similarly, her family and society are totally against her dream which disturbed her morally and emotionally, they also estranged her from the continuing study while she was in class 5 but brave and courageous she refused to give up. Participating in the #KishoriShamvad program changed her life. Nowadays she is studying in class 10 and preparing to take part in the national singing reality show Nepal Idol.

Nirmala Mahato, Harivan, Sarlahi is a shoemaker who makes her living by making shoes for schoolchildren and women.

When she started this profession her society was disgraced. They tried to discourage and bully her because the shoe-making profession is regarded as a work of low caste people. In spite of the continuous hurdles, she established her creativity as a small industry and created employment opportunities for other women in her community who used to go against her.

In the past her husband used to work abroad, they saw many economic difficulties due to less income of her husband who came back with overburdened loans. Without giving up, they both utilized their skill of shoemaking and became self-employed.

At starting her society used to refuse their product to show how disgraced they are, but they succeed to set a remarkable example for their society that no skill/no profession is small.

Bikas Kumar, an 18 years old boy lives in B.P Uthan Park, an area of the marginalized community of Birgunj. He works in a medicine factory and earns approximately 15 thousand per month. He has altogether 10 members in his family. He got married at the age of 17 and his wife is 16 years old who is now 7 months pregnant. Currently, she is at her mother`s home.

Furthermore,  Bikas has two sisters-in-law who are engaged in crafting different bamboo items. Girls in this area are particularly taught to make handcrafted items from childhood. Women in this area are mostly involved in making Daali (Bamboo Basket). Only a few children go to school and some play with kids of the same age.

21 years old Sabita Manav is a mentally unstable woman. She is currently living in Manav Sewa Ashram, Birgunj. A year ago, she was found near Bhansar in a critical situation. In the process of treatment, she was found 4 months pregnant. After proper care, love, and treatment, her condition was much better than before. After 5 months, she gave birth to a healthy baby. The baby boy was named ‘Umang Manav’ as he is a big hope for Manav Sewa Ashram.

Purnima  Acharya is a caretaker of Umang. She is from Butwal. Her husband died in a road accident 4years ago. As she was mentally as well as physically ill, she was brought to Manav Sewa Ashram. But now she is fully recovered with proper care and treatment. And she is properly taking care of Umang being her mother.

Jhijhiya is one of the most famous cultural songs with dance being performed in Madhesh especially during Dashain. It has different religious beliefs regarding Goddess Durga and witches. It is said that the negative energy and black magic  of witches will not affect anyone at the community if Jhijhiya is performed with pure spirit including different members of the community by carrying clay pot and with a lamp inside it on the head. Most of the performers are females who take part in the dance. According to Chandrakala Sada(35 years old), ‘It is especially performed to save the community from black magic during  Dashain. She is also one of the active performers of Jhijhiya dance belonging to Dhanusadham.

In the city full of people and buildings, I found an open space near my house. It’s Bhutan Devi Mandir by the lakeside with lush greenery and refreshing breeze. From this area we can also observe the golden paddy field. This is a religious site with a picnic spot but it has poor infrastructure without taking care of safety. In the case of women and girls, this place is not very safe, but in the morning time few women can be seen walking than it used to be in the past.

Freedom of women is the most talked topic for everyone but in the real world we can take this as an example of how unfriendly the open space like this is for women. During evening time for women, they need to be escorted by a friend as they don’t feel safe to walk alone in this area.

Though in my perspective, this place is free from the urban crowd and has a peaceful environment, it needs some serious attention regarding infrastructure. This place should be facilitated with transportation services and other basic amenities to make this place safe, said an old woman.

Here is the story of the struggle of famous Mithila artist Mithileshwari Devi living in Janakpurdham sub-municipality ward no 3. She is 66 years old now. When she was young, girls were banned from attending school. She used to live with his mother, father and siblings in the village. Since girls were not allowed to read outside the house on a regular date, she used to study with her brothers at home but Mithileshwari was very interested in making traditional paintings. On the different social, cultural and religious occasions of the community  she used to paint the walls, courtyards with traditional paintings. This traditional painting is called Mithila painting.

Mithileshwari had no financial gain from this work but she always garnered appreciation for her paintings from family and community. After her marriage in 1969, she entered Janakpurdham and there also  she painted on the walls and courtyards on different social, religious and cultural occasions. A few years later, in 1990, the Mahila Bikas Kendra (Women’s Development Center) was established. In this center, women around Janakpur used to make traditional paintings on paper, walls, utensils, canvas, etc., and were institutionalized to sell the products in the country and abroad. An American organizer of this organization invited her to work there. But from her community women are forbidden to work outside. Her husband’s support encouraged her to work there. She worked for many years at that institution. She made paintings with her female friends in Janakpur and surrounding areas as well as on the walls of various institutions in Kathmandu. At the invitation of a company, she also painted murals in Japan and other  3-5 countries. She has received praise from various institutions as well as from the Nepal Pragya Pratishtha.

51 year old Subhadra Aley is currently living in Janakpur Sub-metropolitan city. She was born and raised in a normal family of Sindhuli and  her dream was to become a police officer since childhood. With her strong determination and hard work she succeeded to become a police officer in 2041BS. During her recruitment period as a police officer, the perspective of society for women police officers was negative. It’s her husband and her family who supported and encouraged her to fulfill this dream. In 2072BS she retired from her duty as a police officer. Thereafter she made many contributions to the field of social service. She has been working with various organizations including the Nepal government in various places of Nepal and in Janakpur for social welfare.

We are 17 years old girls living in Birgunj. We both are friends and a classmate from the same college. During the holiday we used to go to Ghadiarwa Pokhari for the time pass and refreshing our mind. It used to be among the places where we girls can chill and enjoy.

Nowadays it’s not safe for girls anymore as it used to be before as it has now converted into the place where couples date. Girls from a normal family are not allowed to go there, as they have deep-rooted misconceptions about the place, they think the girls from socially unacceptable families visit such places. Not just we girls lost their favorite place to hang out, but also the value and the condition of Ghadiarwa Pokhari is being decreasing day by day