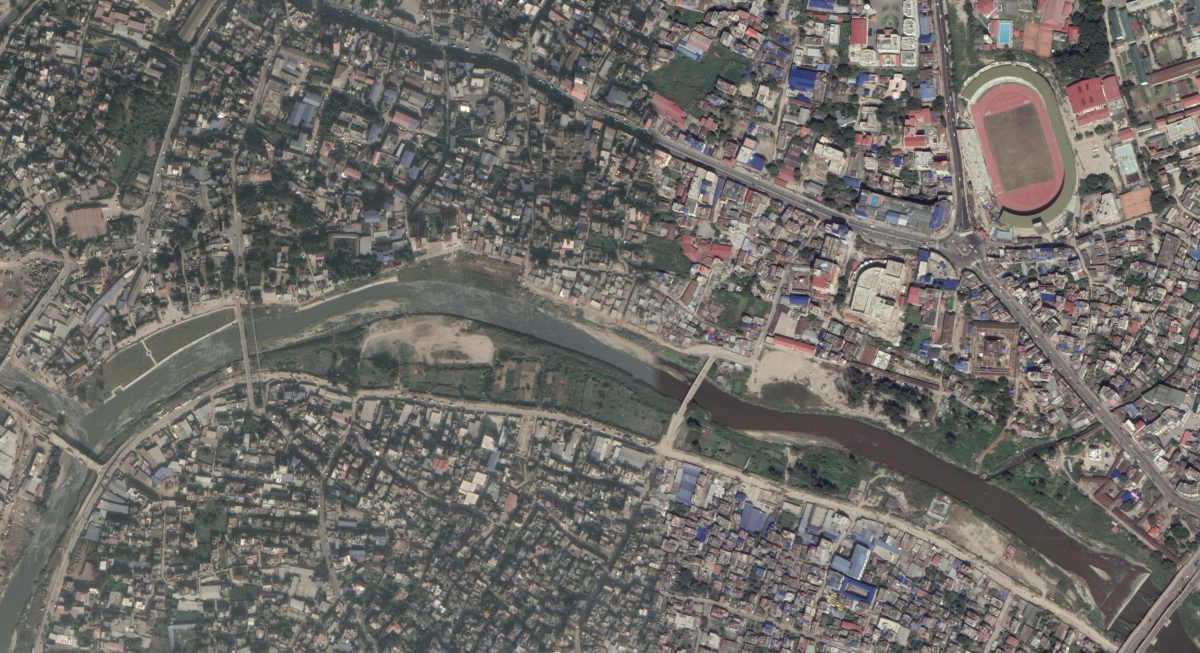 Bagmati Promenade, a part of the Our Dream City Campaign, is a heritage walk designed by StoryCycle and the British Council in collaboration with people living and working in the vicinity and/or having a special affinity to it. The walk has been conceived by combining stories from history, religion and social life, and their connection to modern society. Its interest and appeal has unified people and brought in a lot of knowledge in one place.

Walk along the Bagmati corridor from Thapathali to Teku exploring stories like history, religion and social life and their connection to modern society.

There is a Chess park between the Thapathali Chowk and the Kalmochan Temple established 30 years ago by Bharat Dhimal from Morang District. Back then , very few people  used to come to play chess but now it is producing national chess players as well.

Prime Minister Jung Bahadur Rana built “mini Kashi” for the Hindu pilgrimage visiting Nepal during Shivarati naming them as akhadas outside his once Thapathali Durbar complex which today now lies under the Thapathali bridge. There are four type of akhadas.

Dashanami Akhada: Followers of Sankaracharya are known as dasnami or sanyasis namely saraswati, bharati, giri, puri, thirta, ashra, ban, aryanya, parbat and sagar. Built by Jung Bahadur and restored in 1935. Shivalaya in the center is made by Swami Shivananda Giri in 1991.

Nath Akhada: The temple contain the samadhi shrine (tomb) and gaddi (prayer seat) of Gorakhnath. Devotees come to this temple on the occasion of Makar Sankranti.

This was built by Jung Bahadur Shah in 1874 AD as part of Thapathali palace complex. The temple was also named as ‘Jange Hiranya Hem Narayan Temple after his 2 wives, which is located at Kalmochan ghat. It is rumored that he buried the elites murdered during Kot Massacre in 1846 under this temple. The temple area has been a place for mourning for the deceased of Shah and Rana families. It was severely damaged by the 2015 earthquake.

The main temple is surrounded by 6 different temples with feel of Moghul architecture with Hindu features. It is built on square base  with four doorwasy and two rows of lattice windows. It has 4 legendarsy griffins on the cornice of the first storey. in front of the temple there is a lifesize stature of Jung  Bahadur on a stone pillar. Bronze Garuda statue below the pillar is considered a marvelous piece of metal art of Rana period.

It is situated at the confluence of the Tukucha rivulet and the Bagmati. This area is also called Kal Tirtha. Near Kalmochan Dovan, we can find the temple of Navhareshwar Mahadev which is located in the south-ern corner of a very spacious stone paved courtyard.

Nepal’s first agricultural scientist and a lifelong campaigner to save the Bagmati River. Baidya lived in Tripureshwor where he saw the gradual deterioration of his beloved Bagmati from a pristine and holy river into a cesspool carrying Kathmandu’s sewage, which spurred him to action. Of the 16 books he has written, four are about the necessity of saving the Bagmati Civilisation, a term that he coined and which is now used to describe the river which spawned Kathmandu Valley’s unique cultural and religious heritage. Baidya left behind a powerful legacy among the young citizens of the capital about the need to restore the Bagmati and it is the public awareness that he helped initiate that has led to the frequent campaigns to clean up the river and its banks.

This is the last major temple in tiered style by Queen Lalit Tripura Sundari Devi in memory of this late husband King Rana Bahadur Shar in 1822 AD with 19 small temples and shrines in its compound. She donated 781 ropani to be supervised by Raj guthi at that time. It was later expanded with sattal and ghat by prime minister Chandra Shamsher Rana. It was renovated after 1934 earthquake in 1936. Sundarnanda Bada a poet has given a vivid description of this temple in his book “tri ratna soundarya gatha”. The temple is quite popular as a religious site during Shivaratri, Bala Chaturdashi and also during the month of Shrawan.

The temple is facing south with three tier roof made of copper sheets with attractive pinnacles. On the four corners of the lowest plint of the temple lies panchanyan dieties. There is a life size bronze sttue of Queen Tripura Sundari sitting with folded hand on a stone pillare in front of the temple with seven headed snake as umbrella. The pillar has basof a large stone tortoise with inscription composed by the court poet Pandit Bani Bilas.

The longest and largest ghat complex at Bagmati of 300 feet long with 30 big rooms also known as Purneshwar Ghat. It is now used by Zonal Police office as its barrack. Mushafir Khana is a guest house during Rana regime where foreign guest were lodged. Part of this building is controlled by District police office of Bagmati while part of it converted into  Nepal eye hospital in 1973.

This temple was built by  Bam Bahadur Rana in 1850 when he was acting prime minister while Jung Bahadur Rana travel for Europe. It spread in 20 ropani land which took 9 months to create in Sikhar style with terracotta bricks along with Ram mandir and hanuman ghat. There are too many shrines and temples including Panchalinga Mahadev and 3 shikhara style temple built by Major Guman Karki in 1827 on its premises.

Established by King Gunkamadev as a gatekeeper at the southern city entrance. In those days every door of houses, temples and dyochen were made in a triangular shape and painted with eyes and sword depicting Bhairab deity , King Amar Malla introduced 12 yearly Bhairab dance in 1440 which continued to this day.

In a small area of 50 meter radius there are more than 80 different stone sculptures belonging to different periods of history. It’s like an open air museum of stone art which is maintained by Subba Ganesh Bhakta Mathema of Ombahal tole. A sattal constructed by Ambal Bakhu Singh in 1813 lies in the western direction with open veranda on the ground floor. There are other sattal constructed by Anirudha Dhoj Bhadra Singh, Bal bhadra and Narayan in 1795. The sattal on the right side on the way to Pachali Bhairab is constructed by Bhagiratha Devi Mulmi of Tangal tole in 1951 with a small temple of Ramchandra.

This temple was built by Laxmi Devi in 1813 AD who was a concubine of King Rana Bahadur Shah. She had donated 100 ropanis  of land located at Lubhu and Thimi village for the daily rituals  and functions of the temple which is now under the Raj guthi. This temple is the  best representative of Shah period with a 3 story temple surrounded with chaugera sattals in all directions.

This is a black 400 feet long suspension bridge imported from Paris. Prime Minister Juddha Shamsher Rana opened this bridge in March 1939 to ease the life of peasants, gardeners and vegetable seller of Patan city to cross the river and for people of Kathmandu to visit “raj tirtha” on the opposite of Pachali ghat where people can take a holy bath.

This is the first large monument standing near the confluence of Teku. This sikhar style terracotta temple of vaishnavite  sect was made by junior mother of Prime Minister  Dev Shamsher in 1937 AD.

Teku Dovan is the conglomeration of 2 sacred river of Bagmati and Bishnumati. Also known as Chintamani tirtha for the Kathmandu valley Buddhist community. There is more that 10 votive stupa or chaityas with many burning ghats or crematoriums. This area is also called Chintamani Tirtha. This the holy place of Ne muni hermit who initiated 17 days long heritage walk praising the holy water of Bagmati river holding more than 165 shrines along its river banks.

Shikhara style temple located in the middle quadrangle surrounded by structures of carved  wooden windows. The brick sanctum is surrounded by an octagonal porch with 28 large wooden pillars.  The temple is made by Bhava Singh Pradhan or Tavdik Bharo and his wife Sivalaksmi in 1792AD.

It is  vaishnavite temple with stone figure of Krishna Balram and Subhadra kept in sanctum. It has 780 bighas  of land in tarai region of Nepal.

A wooden palaquine kept inside the wester sattal is used once a year on the second day of Krishna Astami to celebrate khata yatra.