Take a tour on the ‘moving’ story of Pople of Dhe Village and heritage around it. Dhe is currently struggling with the negative consequences of climate change and is about to relocate. 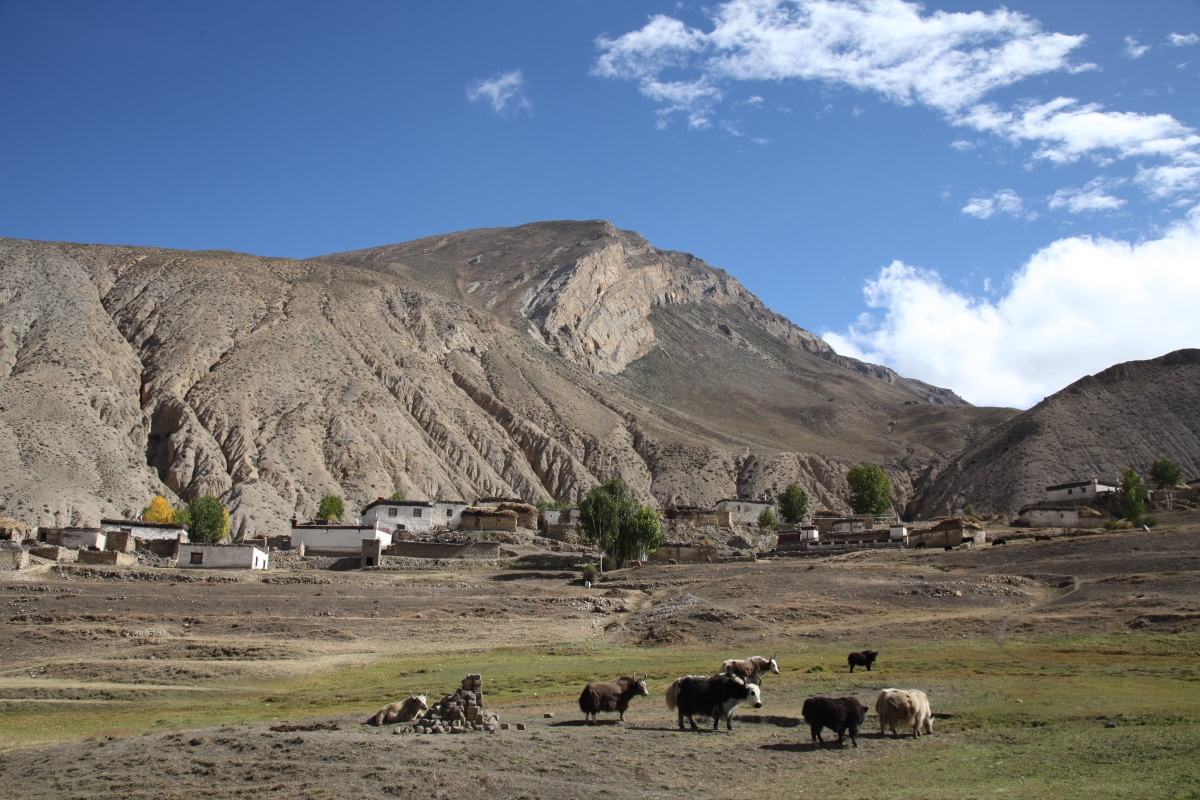 Dhe is a small village located in Upper Mustang, in Mustang district. Dhe is locally known as Dewa which means a blissful land of Buddha or Sukhavanti in Sanskrit. The locals are known as Dewa. Dewa denotes both people and place. Dhe locals speak Tibetan dialect, known as Lowa which is quite different from Standard Lhasa Tibetan.

We start our tour from Kathmandu, the capital city of Nepal. Dhe is not that far from Kathmandu, it is around 450-500 km away. However, getting it is not easy. First of all, we have to reach Pokhara which takes around 6 hours by land, 25 minutes by air. From Pokhara, we have to travel towards Jomsom, the capital of Mustang district. By land, it takes around 10 hours but by air, it is just 20 minutes to reach Jomsom from Pokhara. To get used to the local condition, you can stay at Jomsom or Kagbeni. There are two locals jeeps going to Upper Mustang every day, but you can also reserve your private ride which takes 7 hours from Jomsom to reach Tsarang and 1.5 hours from Tsarang to Dhe. There is also an ancient trail from Tsuksang which goes to Dhe via Tangya.

Now, there are 14 families with almost 100 people living in the village. Dhe village follows Nyingma sect of Tibetan Buddhism and there are few families with Bon heritage. Most of Upper Mustang follows the Shakya tradition of Tibetan Buddhism. Villager’s resettlement dream depends upon the success of this apple plantation. These organic apples need a market. Collaboration with Greengrowth to take the first Harvested apples to Kathmandu.

They are dependent on agriculture and animal husbandry for livelihood. Seasonal trade in winter months is also very important for survival. There is only a single crop cycle in the village and agricultural produce is never enough for the villagers to last the whole year. Mostly wheat and barley are grown here. Unlike other higher settlements in the Himalayas, buckwheat doesn’t grow in Dhe. Upper Mustang region lies in rain shadow thus the landscape is mostly barren and dry. Walnuts, peaches, apricot, hazelnut, plum and other few fruit trees are cultivated in Dhe. Apple plantation is supposed to make the transition easier so they are serious about their apples.

Due to climate change, precipitation patterns have changed and pastureland is degrading at an alarming speed. Animal husbandry is not possible due to the lack of proper pasture in Dhe. The acute shortage of water has forced villagers to abandon their fields. Climate change and environmental degradation have depleted water sources of Dhe. Extreme weather and precipitation pattern have changed the local landscape and water system. There is almost no effect of monsoon in Upper Mustang. The winter snow is expected to accumulate and melt in spring months to provide water for the irrigation. But in recent time – snow melts during winter months due to high temperature resulting in flood. The groundwater system almost has no time to charge itself. There is no snow left for spring – so most of the water sources in the region have dried. Agriculture is simply not possible right now in Dhe. There are only 9 families left with a goatherd and just one family of Dhe owns a yak herd now. Yak is expensive and a loss of a single animal can ruin the family’s yearly net income. Degrading pasture is making animal husbandry unsustainable in Dhe at the moment. A small but vital part of income is generated by selling local surplus such as Jimbu, mushroom(s), and other local products in lower areas during winter months. All forms of traditional livelihood in Dhe is affected by climate change.